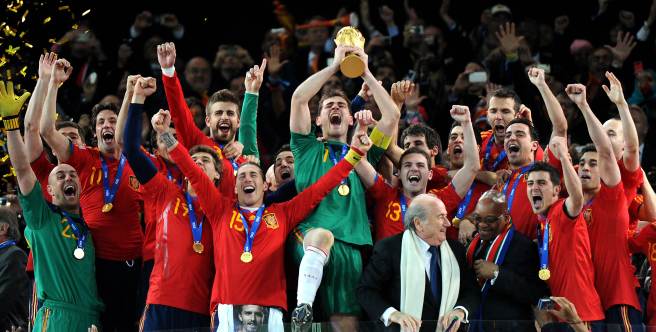 So says the headline on El Mundo, a Spain newspaper that Mario reads religiously, and one which I’ve taken to reading as well.

Soccer, to me, meant little before I went to Spain. In fact, soccer meant little before this year. I started to really grasp its significance during the end of the league games in May. The warm nights would allow Mario and me to open the windows of the stuffy apartment, letting in the cool, early summer night air. With the air came the sounds of soccer, the cries of the rabid fans. Mario and I would be in his room, his nose buried in 300 pages of notes, mine in a book. It always began with a profound stillness. The stillness was disquieting in a way. Spain is not known for its subdued citizenry. But I’d forgotten – the game was on. What game is the game? The answer, my friends, is simple. The game is any game, any game that has the slightest importance that happens to be on tonight. So, the silence was deafening. That is, until a goal was scored. A roar would go up, the open windows and doors allowing for the cries of the Spanish soccer fans (i.e., the whole nation) to be heard. Mario would smile, say, “Someone has scored,” and flip on his portable radio just in time to hear the exuberant announcer screaming, “GOOOOOOOOL! GOL!” No matter who it was, when it was, whether it was the first or fifth goal, the announcer would yell until he was out of breath. It was almost laughable if it weren’t so utterly fervent, if the sentiments behind it weren’t 100% genuine.

Soccer, fútbol, is king in Spain. It’s king in a way that no sport can ever be here, in the U.S. We have too many commitments: we love basketball, baseball, tennis, football, swimming. We are great in many, if not all, of these sports. Yet we have yet to really become a player on the world stage of soccer. Why? I’m not sure. I just know that no other sport can compare to soccer in Spain. It’s a unifier in an often divided country. With the Catalonians fighting for their independence from Spain, the terrorists in the Basque country, it’s easy to see just how divided Spain can be. But soccer and rooting for La Roja unites those from all walks of life, from little Spanish abuelas who barely reach five feet tall to African immigrants to the boys playing soccer in the city plazas. It is a non-elite sport, one that can be played with hardly any equipment. All that’s needed is a ball and a dream.

Thousands of little Spanish boys who watched this final tonight have gone to bed, thoughts of Casillas and Iniesta dancing in their heads. Tomorrow, Monday morning, will dawn bright and early. They will yawn, stretch, and wake up to a beaten up soccer ball nestled in bed beside them. And they will smile.

2 thoughts on “Champions … and It’s Not a Dream”