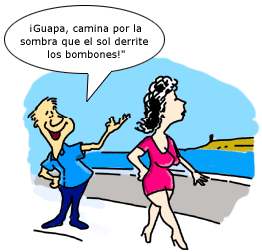 A piropo is, as defined by my favorite website Wordreference, a “flirtatious/flattering comment.” What’s more, it’s the type of flattering comment that men pay women as they walk along the street, minding their own business. One site even defined it as a “poetic” compliment. I’ve never gotten a poetic compliment, but I’d like one, please and thank you.

In Toledo, for some reason or other, piropos were much more common. Ten times more, I’d say. I couldn’t go to the market in the morning without some blue jumpsuit-clad construction worker telling me how guapa I looked that day. Interestingly, it didn’t always depend on how good I thought I looked. In fact, I got some of my most aggressive compliments while running, sweaty and dripping, alongside a road that encircled the city. I remember one such incident quite clearly. Having gotten used to annoying men and their leering comments, I usually played my music at high volumes so as to avoid having to hear them. Even if they yelled out their windows, I could usually keep myself blissfully unaware of their words. It helped that they were in Spanish and thus harder to decipher with my music on high. That day, I wasn’t so fortunate. I was nearing the end of my run, red faced and exhausted. I was probably only pumping out a 10 minute mile (which, for me, is kinda slow). A white van pulled up alongside me, slowed down to my pace (!)…this continued for a good minute. Finally, I couldn’t help myself. I glanced over at it. The man, missing one of his front teeth, was in the passenger side. He leaned out, almost half his body now outside the window, and yelled, “¿Y por qué estás corriendo? ¡Ya estás guapa!” (Literally, “Why are you running? You’re already good looking!”) Oh my. I think I turned three times redder than I already was and slowed to a halt. The van sped off,  the men cackling.

As you can tell, I’m not too fond of piropos. I suppose someday, when I’m old and wizened, I’ll miss them. Maybe. But right now, they’re just not my favorite.

However, yesterday’s piropo takes the cake. It was, shall we say, a backhanded compliment. I was taking the recycling out to the bins near my apartment. Two old men were hanging out right beside the colorful containers, talking as old men are wont to do. I caught a snippet of their conversation, “…elegante…bonita.” I thought they were talking about something else. (I really am not that full of myself!) I deposted the bags and turned to go back the other way. The man almost bumped into me, and said, “Bonita, a ver si tomas el sol…” (Pretty girl, let’s see if you get a suntan…) So, this man was like, “Hey, you’re pretty, but you could really use a nice suntan!” I played the foreigner card and marched on, trying desperately not to blush. (Never let ’em see you sweat!) Of course, I thought up a few dozen different smart aleck comebacks after I was out of earshot. It’s how it always goes, you know.

So, other extranjeras en Espain, what do you say? Piropos – do you like them or not?