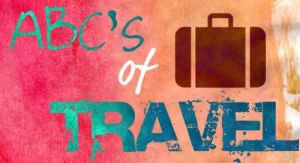 Christine from Christine in Spain tagged me in this travel ABC survey and I thought it would be fun to participate! Also, it means I get to tag 5 people I want to know more about, which satisfies my nosy side. So, without further ado, here I go.

A: Age you went on your first international trip: I didn’t really go on an international trip until I was 17, a senior in high school. We went on a cruise and visited Jamaica, Mexico, and the Cayman Islands. I don’t consider it too international, though; cruises are less about travel and more about leisure.

B: Best (foreign) beer you’ve had and where: I don’t like beer, but the beer in Belgium was superb. I really liked Chimay.

C: Cuisine (favorite): Hmm, that’s so tough for me because I love so many different types of foods. However, my favorite foods include hummus, yogurt, and lamb, so I’ll agree with Christine and say Greek. However, I love Mexican, Indian, Thai, and – of course – Spanish, especially if it’s made by Mario’s mom, the best cook ever.

D: Destinations, favorite, least favorite and why: Favorite would have to be London. I think it was partly because I was with this guy, but also because there is so much to do, so much to see. You could spend days and days there, just sightseeing. Plus, all the museums are free, which I love. Least favorite would probably be Jamaica and only because I had a bad experience, so please, I know Jamaica is probably wonderful; I just didn’t have that experience.

E: Event you experienced abroad that made you say “wow”: Holy Week in Zamora. Everyone makes a big deal about the Holy Weeks in the South (a.k.a. Andalucía), but they take their Holy Week seriously in Zamora. I was overwhelmed by the people’s willingness to wait hours upon hours to see the processions, even if they weren’t religious.

F: Favorite mode of transportation: Trains are the best, even though they are relatively expensive. (I hate buses. Ugh.)

G: Greatest feeling while traveling: The freedom to just be, to experience another place and not worry about having to do certain things or see certain sights.

H: Hottest place you’ve traveled to: The Grand Canyon was pretty hot, but I barely remember – I was 13.

I: Incredible service you’ve experienced and where: Not in Europe…the best service is generally in the U.S., but there’s a reason for that: they work for tips. In Spain, however, the waiters are actually paid a living wage and are generally adequate, but nothing too over-the-top. I can’t say I miss the whole, “How is everything?” every 5 minutes, though. I like being left alone.

J: Journey that took the longest: My parents, brothers, and I drove from Indiana to Yellowstone (Wyoming). They took over two days, although we split it up by visiting places in South Dakota along the way (Wall Drug, Mount Rushmore).

K: Keepsake from your travels: Mario. Does he count? Oh…well, I don’t really treasure things like that too much, so it was impossible for me to think of anything.

L: Let-down sight, why and where: Madrid as a whole. I don’t like hating on it, but I think other parts of Spain are way more interesting (and yes, I’m including Mario’s hometown, Zamora!).

M: Moment where you fell in love with travel: I guess it would be after coming home from Spain in 2008. I spent the whole next year wanting more, wanting to see more and experience more before I ultimately settled down.

O: Obsession—what are you obsessed with taking pictures of while traveling?: I don’t think anything? Me in famous places, I suppose.

P: Passport stamps, how many and from where? You know they don’t stamp your passport when you travel within the European Union? So disappointing. Canada, Mexico, Jamaica, Grand Cayman Islands, U.S. Virgin Islands, Portugal, France, Belgium, U.K., so 9. It sounds so little compared to some of you all’s!

Q: Quirkiest attraction you’ve visited and where: Wall Drug. For some reason, this drug store in Wall, South Dakota, attracts a lot of visitors and spends something like $400,000 on billboards a year. Wow. According to Wikipedia, “Wall Drug earns much of its fame from its self-promotion. Billboards advertising the establishment can be seen for hundreds of miles throughout South Dakota and the neighboring states. In addition, many visitors of Wall Drug have erected signs throughout the world announcing the miles to Wall Drug from famous locations, treating it as a geodesic datum. By 1981 Wall Drug was claiming it was giving away 20,000 cups of water per day during the peak tourist season, lasting from Memorial Day until Labor Day, and during the hottest days of the summer.”

R: Recommended sight, event or experience: I recommend talking to the locals, as cliché as that sounds. I learned so much more about Spain – about tapas, eating, paseando, cafés, etc. – when I met Mario. He let me in on the real deal, and for that I am eternally grateful.

S: Splurge; something you have no problem forking over money for while traveling: Sights I’ve always dreamed of seeing – the Louvre, the Eiffel Tower, etc.

T: Touristy thing you’ve done: I’m not ashamed of doing touristy things. I get annoyed when people claim to be so anti-tourist that they don’t take tours. You can learn a lot from those! I’ve gone into the Alhambra, visited the Chocolate Museum in Brussels, and eaten in touristy restaurants in Lisbon. I’m not ashamed.

U: Unforgettable travel memory: The day I first set foot in Spain (and thereby in Europe). It was surreal for a long time, like was I really here? I think I wore a silly grin for days.

V: Visas, how many and for where? I got one when I was a Conversation and Language Assistant last year. But that’s it for me. Maybe the future has more in store for me, though…

W: Wine, best glass of wine while traveling and where? Spanish wines are the best, no doubt about it. I love wine from the Toro region, where Mario’s family is from. For a good everyday wine, I adore (!) Elias Mora. I did have a Gran Reserva Marqués de Cáceres that was phenomenal. However, Mario has had a several hundred dollar bottle of wine. (I mean, he had a glass, not the whole bottle!) 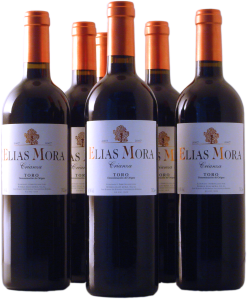 X: eXcellent view and from where?: Mirador de San Nicolas in Granada, Spain.

Z: Zealous sports fans and where?: Um yeah, European soccer fans are definitely what one could call “zealous” and probably even “overzealous.” Things can get scary/violent. I went to Santiago Bernabeu, where Real Madrid plays, with Mario and his brother last October. We sat up in the nosebleed seats. It was fun to see how they watch soccer – everyone brings a bocadillo for the break. Also, we weren’t allowed to bring in closed bottles of soda, only open ones because, as Mario explained, they’re a lot more dangerous when closed (they’re harder).

And yes, to all my readers, Mario and his family are Madrid fans. Thus, so am I. So no hatin’. 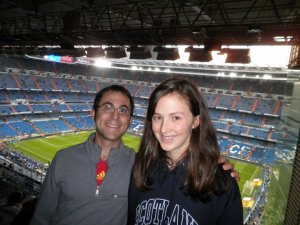 I would like to tag the following people because a) they’re all awesome and b) they’re all Spain people, like me. Okay, ladies, now it’s your turn!