Because I’m a nerd like that, I spend a lot of time reflecting upon linguistics topics, especially those having to do with Spanish and English—their similarities, their differences, and why these things are so. I also revel in explaining such differences to people, as if they actually care. (My mom says she does, but I think she secretly goes into her characteristic I’m-listening-but-not-reallymom mode. And that’s fine. Because I have you all. [I know; try not to jump for joy. Or—alternately—do jump for joy. Just be sure the ceiling’s high enough and stuff, you know. I don’t want any blog-related injuries.]) 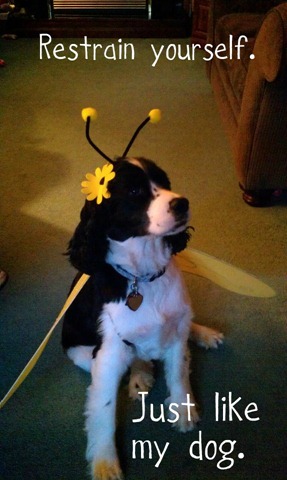 When I first started on what I like to sarcastically call my Spanish Language Journey (yes, I say the italics out loud), I was more concerned about memorizing all the maddening irregular verbs than the whys of it all. Nowadays, having progressed past where I was at fifteen (you may congratulate me now), I spend more time on carrying out all these things I have learned—in conversation with my permanent intercambio, Mario.

In traditional intercambios, you’re supposed to spend a certain period of time speaking each language. In our intercambios, this does not happen. It’s more of a jumbled-up conversation, full of code-switching. So naturally, I mess up a lot. Mario does too, just not a lot. Sometimes I get why I messed up, like when I say “para que practique” when I should say “para practicar.” (I’m referring to myself here, if you care and know Spanish.) Duh, I get it. I just got all the exasperating subjunctive tense mixed up in my head. NO NEED TO CORRECT ME! NO NEED!

But sometimes I mess up—at least according to Mario (what does he know?)—and I get it, but … no really, I don’t get it, so I try to memorize these rules and shut up about it already because there’s no reason not to do so.

Except, being me, there is a reason to do so. My brain won’t stop going over the same topics again and again until I give it respite by either 1) falling asleep, or 2) drinking red wine on my couch.

So, without further ado (oh, and there was lots of ado here), here’s a list of things that regularly give me pause—reflexive verb version. Students earning an online degree in Spanish may find this helpful for their own studies. Before I begin, I want to say I fully understand that some reflexive versions add emphasis (comerse vs. comer, pensárselo vs. pensarlo)

Right now, that’s all I can think of. Help. Or don’t. I’m used to being lost in this area.

25 thoughts on “Rookie Mistakes: Reflexive Spanish Verbs and Me”