Madrid’s Teatro Real Restaurant was the perfect place for Mario and me to celebrate our first wedding anniversary. Elegant, glamorous, and ethereally silent, this restaurant is located on the second floor of the royal theater and is itself decidedly royal.

The Teatro Real, or Royal Theater, was originally built in 1850 in front of the royal palace. It served as the city’s opera house and housed the Madrid Royal Conservatory until 1925. There were several periods of reconstruction, but the theater opened for good again 1997. It hosts opera, concerts, and ballet and is home to the Madrid Symphony Orchestra and Choir. Its many halls are decorated with works of art from the Prado and Reina Sofia museums. 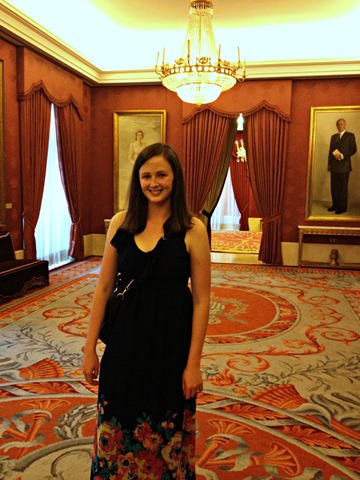 To enter the restaurant, you must walk through a few different salones, or rooms, all of which hhae a color theme.

The restaurant itself is also magnificent. The starry ceiling replicates Madrid’s much-advertised cielo.

And although the restaurant has a capacity of 200, we were the only diners for a good hour! We ate early for Spain, at the elderly hour of 9 p.m.

We ordered the menú de degustación, which wasn’t really a tasting menu, but we got a good idea of what the restaurant does well. (Hint: most everything.)

To start we had a taco de salmón, with a bit of mustard and tarragon. I forgot to get a picture! 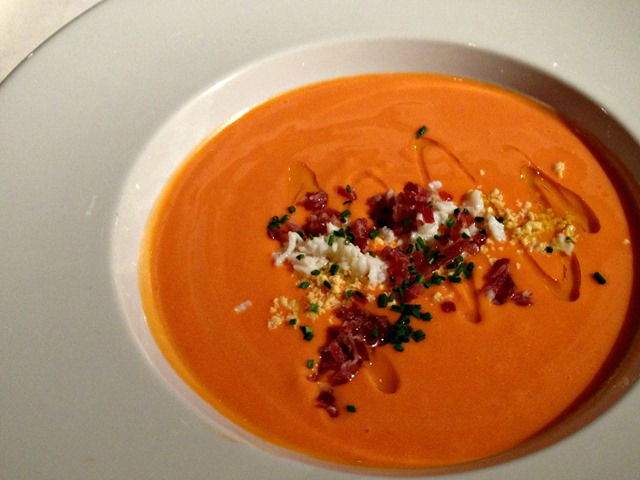 Next was perhaps my favorite plate of the night, salmorejo cordobés con virutas de jamón ibérico y huevo, salmorejo with shaved ham and egg . Salmorejo is a purée consisting of tomato, bread, oil, garlic, and vinegar, originating from Córdoba, Andalucía. This was breathtakingly good: creamy, tangy, and rich. The ham was obviously Iberian. I couldn’t stop telling Mario that I never wanted this dish to end! 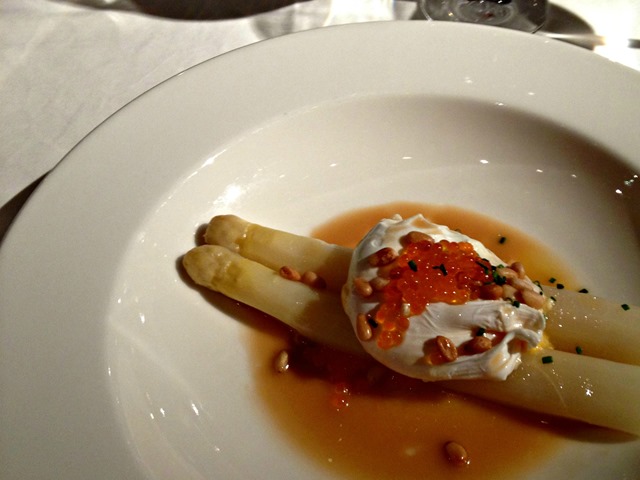 Next: espárragos blancos con huevo escalfado y aceite de piñones, white asparagus with poached egg and pine nut oil. There were also salmon eggs, perched atop. The egg itself was not salted, but once you bit into the salmon egg, it let out a perfectly juicy pop! of saltiness. The asparagus itself was perfectly cooked, and didn’t have the sometimes unpleasant texture of canned asparagus, which is a common dish in Spain.

Now for the fish: corvina al horno con mejillones en salsa de coco y lima, oven-baked corvina with mussels in a coconut-lime sauce. The coconut and lime worked perfectly to complement the delicate taste of the corvina, and the onions were caramelized to perfection.

This dish was presa ibérica con mojo canario y patatitas confitadas, Iberian pork with Canarian mojo sauce and a caramelized potato.The meat was delicate, tender, and full of flavor, including thyme and sea salt. The mojo sauce went perfectly with the potato and the meat, giving it just a slight kick. After this dish, we were more than full. But there was still dessert …

Our dessert was light and refreshing, perfect for a hot summer’s day: piña colada en texturas, different textures of piña colada. There were dehydrated bits of sweet pineapple atop coconut cream with a pineapple sorbet underneath. Delicious!

All of this came with white wine to start and red to finish. The white was Fray Germán, a Verdejo, and the red was Ribera del Duero, Valdubón. The red was really quite full-bodied and rich, but as red-wine enthusiasts, we found it enjoyable. 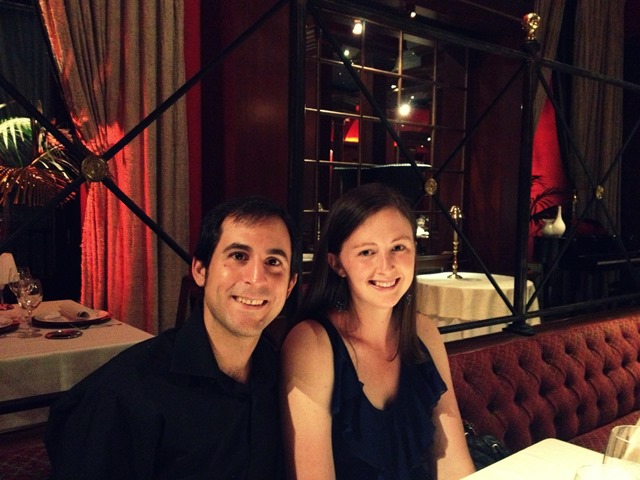 Here’s to one great year and many more! It was a meal worth repeating. (Next year, perhaps?)