Christmas is about food (among other things), and in Spain it’s no different: food is the perfect way to gather the family, sit down to a huge meal, and talk and drink for hours. What foods remind you of Christmas? For me, it would have to be turkey, ham, mashed potatoes, pies, and Christmas cookies. Let’s not talk about eggnog, please. In Spain, things are a little different (as always).

What do Spaniards eat at Christmas?

Keeping in mind that this varies by household, here are some of what Mario’s family and friends along with my students here in Madrid eat for Christmas: 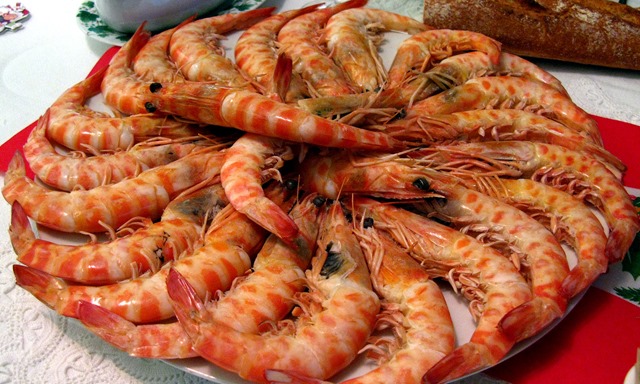 If you don’t know much about Spain, this may surprise you: Seafood? At Christmas? But yes, it’s true—seafood is one thing my students always mention when we talk about Christmas meals. Shrimp, prawns, octopus … you get the picture! Christmas and seafood, mariscos in Spanish, are not incompatible. Here in Spain, the selection is almost always fresh and good quality, so what’s not to love? Except if you’re an octopus hater like me.

Turkey is difficult to find at Thanksgiving time, but it isn’t uncommon during Christmas. While perhaps not as universal as seafood, it is indeed common.

Americans tend not to eat a lot of lamb, and I had often asked myself why not. Turns out, there’s a story behind this that involves American soldiers during World War II having to eat mutton (lamb’s tough, less-appealing older brother) and, upon their return, eschewing lamb for other meats like turkey and ham. (Read more.) But lamb is delicious! Mario and I had suckling lamb (lechazo) at our wedding, as it is a specialty of Castilla y León’s.

Other meats include red sea bream (besugo in Spanish), capón (castrated male chicken), and the pularda (a young chicken).

Turrón is Spain’s answer to pie—it’s everywhere you look, although people normally don’t make it themselves; they purchase it. And you can find it in almost every single store. It’s normally made of honey, sugar, and egg whites with toasted almonds. However, there are infinite varieties, and the final product can be hard or soft, crunchy or chewy. Some other kinds that people have spotted include Irish Coffee and Tutti Frutti (!). There are several different quality levels, going from Suprema to Extra to Estándar (standard) to Popular.

Its origin is Moorish, and it’s said to have been invented over 500 years ago in Jijona, a small town near Alicante. Nowadays, there is a turrón museum there, and Jijona continues to produce turrón.

While we have gingerbread and sugar cookies, Spain has mantecados and polvorones. I’m not a huge fan of sweets in general, so I profess to not loving these. They’re made from pig lard (manteca in Spanish means lard), and, as Cat says in her post, often mass produced. 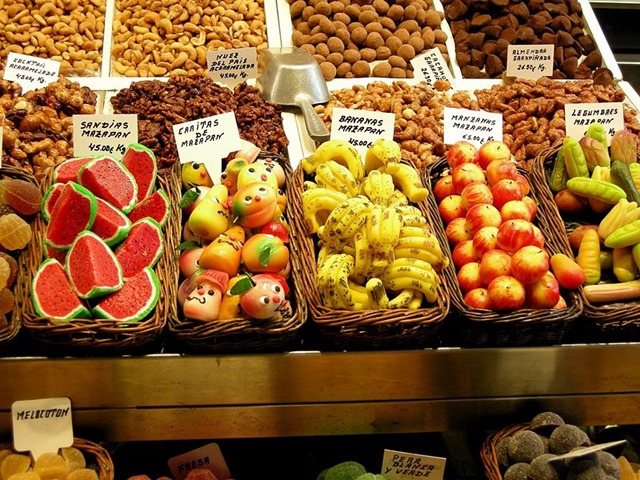 As a former resident of Toledo, king of marzipan, I profess to loving this overly sugary treat. I don’t normally have a sweet tooth, but there’s something about this combination of sugar and almonds, often formed into shapes.

This sweet is not eaten at Christmas, but at Epiphany (January 6), which celebrates the arrival of the three wise men (reyes magos). Traditionally, children would get their presents on this day, though nowadays many receive presents on Christmas Day and Epiphany.

The recipes varies greatly, but the roscón is traditionally decorated with fruta confitada, candied fruit, and is sometimes filled with whipped cream. If you buy yours in a shop, they will often have a figurine hidden in the cake (like the baby Jesus). Whoever finds the figurine is the “king” of the fiesta, whereas whoever finds the fava bean has to pay for the roscón.

If you’re Spanish, what do you eat for Christmas? If you’re not, tell me anyway.