That sentence (Nine months of winter, three months of hell) is supposed to describe Madrid. Supposed to. Because it’s utterly untrue. 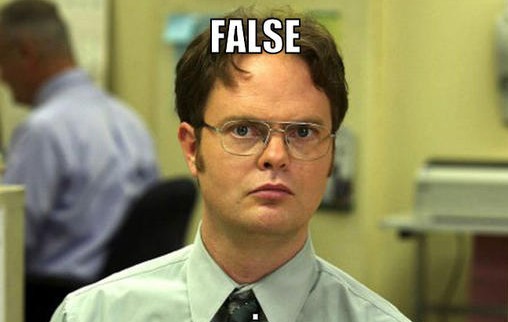 Dwight and I agree on this

Perhaps you grew up in sunny southern California and you would beg to disagree. But sorry, no—you’re also wrong.

Lonely Planet is also wrong when it states, “It has, they say, a climate of extremes, as summed up by the phrase nueve meses de invierno y tres de infierno (nine months of winter and three of hell).” FALSE!

I didn’t grow up in Canada’s Northwest Territory or nothern Sweden, but I’ve gotta be honest—Madrid does get very hot, but not much hotter (and sometimes cooler!) than my home state of Indiana. And the winters could be best summed up as mild.

The average daily highs in January and February hover around 50 F (10 C), which … what? This is cold to you people? I remember when, during one of the first cool days in autumn, the temperature dipped to 45 F or so, and a Madrid-based Facebook page put up a picture of someone covered in blankets and scarves, lamenting the “cold” weather.

Soon in Indiana, temperatures will reach -11 F (that’s around -24 C). Let’s not compare that with Minnesota or Alaska, but—that’s cold, people.

19 thoughts on “Madrid Has No Winter”