Hello! Long time no blog, eh? While I get around to fighting my writer’s block, let’s have another interview with an American dating a Spaniard!

Let’s see… My name is Katrina and I’m 21 years old currently studying to become a speech-language pathologist in Pennsylvania. I’m not living in Spain currently, but hope to teach English there for a few years after I graduate/before graduate school. It’s sort of ironic, as I chose not to study Spanish in high school due to its popularity (I did German) and am now thinking of teaching in Spain.

How did you meet your significant other?

I was at a party, looked across the room and saw this beautiful creature before me. My eyes instantly locked on his blue eyes and… just kidding, our meeting wasn’t conventional at all. We both were members of a pen pal website, InterPals, and happened to be online at the same time. He sent me a message and we started talking and it eventually became more frequent correspondences. After months of talking we managed to find the time to meet each other and it’s been steady for almost 2 years now!

Is your significant other is a “typical” Spaniard?

Like most of the other interviewees, I’d say Ari’s a mix. He’s actually from the Basque country which has its own culture/language/history on top of Spain’s (check it out—its language is as old as or older than Latin) so he has some of their tendencies too. He’s stubborn, loves soccer (enough to have three scars from it), eats potatoes and bread a lot, wears slippers inside, doesn’t like/understand leftovers, and (normally) refuses to eat dinner earlier than 7 p.m. It’s also amazing how he (and Spaniards) talk unbelievably fast and are thinking of the next thing they want to say while talking. He even does this in English!
Ari isn’t a typical Spaniard in the sense that he loves buffalo sauce, hates bull fighting and stores closing at 8 p.m, is trilingual, and has blue eyes (in a sea of brown-eyed, brown-haired people).

I’m amazed you can get any Spaniard to eat dinner at even 7 p.m.! Which language do you speak when you’re together?

Well, we are normally speaking in English, and sometimes Spanglish, but I’m trying to change that! Since we aren’t actually living together in one set location and I’m in the middle of college, it’s hard for me to really focus on learning Spanish. When we have time, I do try to practice. Luckily I’m visiting him for Christmas so I’ll be able to practice it much more!

How do you deal with the “in-law” issue? Have you met them?

His parents are absolutely fantastic! Like most Spaniards, they are extremely hospitable. They invited my family to visit this past summer and had many things planned when we arrived and helped when necessary. They always try to include me in conversations and speak slowly. His mother and aunt always try to feed me until I can’t move … for example: one time they served fish for dinner. Since they knew I don’t like fish they tried to accommodate by making me some small steak meat. I told his aunt I’d like one, maybe two (they are really thin and small) … his aunt said, “No, no! You need six!”, and proceeded to make that many and got upset when Ari’s dad tried to eat some. Ha!

What is the best part about dating/being married to a foreigner (and especially a Spaniard)?

The best thing is that it allowed me to become more aware of a culture I knew little about. They have some great food, traditions and landscapes. I even learned some new drinks such a 43 con Coca-Cola (a vanilla liquor with Coca Cola) and kalimotxo (red wine and Coca Cola … sounds gross but is good!) Dating a Spaniard is especially nice as he gets twenty days off throughout the year, so that helps for visiting.

What is the most difficult part?

Distance. Since I’m currently studying in the United States and he’s over in Spain it is somewhat difficult. Luckily we are able to talk on Skype and Whatsapp (a free phone messaging system).

You must be willing to compromise and think about the short term and long term, especially when living in separate countries. You should always take into account visitation (family or each other) and how often you can afford that financially and time-wise. Understand that there are cultural and linguistic differences, such as cows saying ‘mu’ in Spain and ‘moo’ in the US … Okay, maybe we’re the only ones that ‘fight’ about that.

Worse than the cow is the rooster, who says kikiriki in Spanish! Do you plan on living in the US or in Spain long term? Why?

After graduation it’d be nice to live in Spain for some years to better my Spanish and be with him. I think that we’d end up residing in America in the long-term as there are better job opportunities for the both of us. Who knows though, perhaps I could give therapy to expat families or Spaniards wanting to lose their accent… only time will tell.

No matter what, I’ve always wanted to try to raise bilingual children, whether it be German (with my knowledge) or Spanish… If we ended up having children, there’s no doubt in my mind that we would raise them bi- or trilingual (with Basque, depending on where we’re residing).

Import to the US: alioli (like a garlic mayo),the summer fiestas, the community feel, siesta time (with all shops closed), and NOT cooking hamburgers in oil … oh and the later party times. (I’ve grown accustomed to their parties that start at 1-2 a.m.)
Import to Spain: peanut butter/Reese’s, s’mores, earlier dinner times, and dryers! 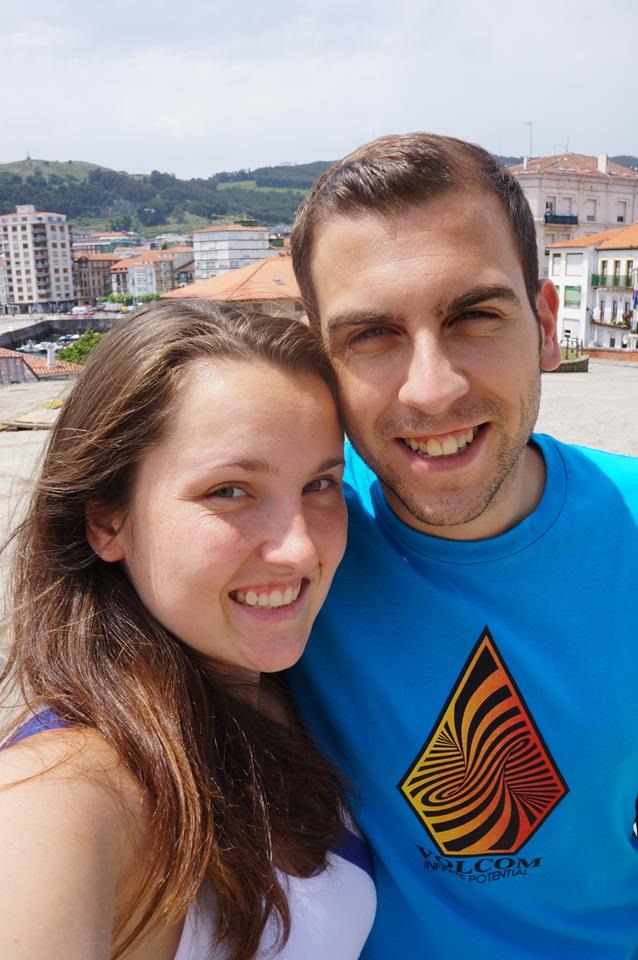 Just being with him has made me more outgoing, although I’m still my same goofy self. He’s definitely made me more confident in myself and my ideas. Whenever I have a new idea he accepts it with open arms, helps me tweak it if need be, and then continues to support me throughout the whole thing. I’ve begun to think more long-term and think about how decisions now can be beneficial in the long run. Of course, it’s also opened me to a culture that is deeper than what I’ve been taught by school and media; a culture that I now love and enjoy.

One thought on “So You’re Dating a Spaniard—Katrina”