I am not very good at keeping up with the news. I don’t watch the news broadcasts; I don’t buy a newspaper. The most I do is follow Spain’s three big national newspapers on Facebook. (Those three being ABC, El Mundo, and El País.) However, in a concerted effort to know more about my world, I’m committing to write posts like these—updating you on what’s been happening lately in Spain. I’ll link to these stories in English, though many of you may read Spanish.

Adolfo Suárez was 81 years old when he died, and he could no longer remember leading Spain, due to a debilitating case of Alzheimer’s disease, which he suffered from for nearly ten years. He served as prime minister from 1976 to 1981. During that time, his regime implemented democratic reforms and held Spain’s first free elections since 1936, prior to Spain’s civil war. Suárez inspired a lot of love and loyalty, and the crowds came out to pay their respects—more than 30,000 of them turned up to say farewell to him during his funeral procession. 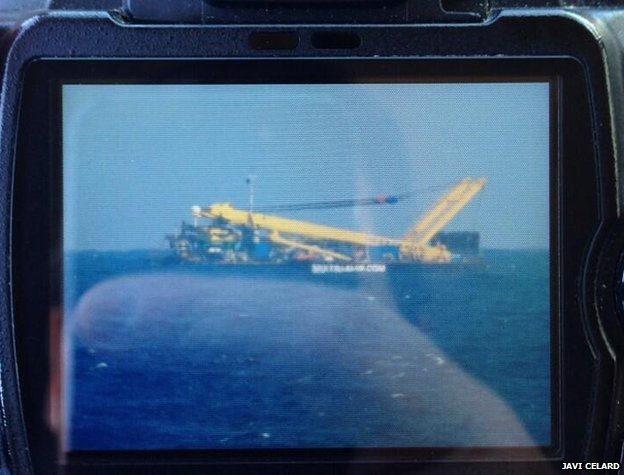 Last week, a false report about a downed aircraft off the coast of the Canary Islands caused confusion. Two miles off the coast of Gran Canaria, a tug boat was transporting a large structure that had a shape similar to that of an airplane. Nonetheless, emergency services were activated and a helicopter was dispatched to the scene. Later authorities confirmed that the object wasn’t a plane but a boat. The large object turned out to be an airplane wing.

In January and February, 530 immigrants managed to jump the barbed-wire fence, triple the monthly average. Spain, still feeling the effects of the crisis, is asking the European Union for help patrolling its borders. The immigrants mostly come from Mali and Senegal. They see Spain as sort of promised land. Many shout in victory as they cross, feeling that they are free here.

Ocho Apellidos Vascos (Eight Basque Surnames) is making news for its success—Spaniards are actually going to the movie theater to see a Spanish film! It’s been the most-successful Spanish film since The Impossible, which told the story of the 2004 tsunami. It tells the story of a Rafa, a sevillano, who falls in love with a Basque girl, decides to leave his home, and pretends to be Basque himself. It breaks a few taboos along the way, including making jokes about the Basque country’s history of violence. ETA, a terrorist organization, has declared a ceasefire.

Spanish Evictions: Shocking Number of Spaniards Are Evicted From Their Homes Daily

Last year in Spain, there were more than 67,000 court-ordered evictions. There are over 80,000 still-open cases, meaning pending requests for eviction.

The Mad Rush to Claim Spanish Citizenship in Brazil

The Madrid began a process to modify Spanish civil code, thus granting citizenship to Sephardic Jews, whose ancestors were expelled from Spain way back in 1492. Sephardic Jews are Jews descended from those who lived on the Iberian Peninsula (modern-day Spain and Portugal) in the 1400s. The Spanish and Portuguese rulers ordered the Jews to either convert to Catholicism or be expelled/killed. They were given four months. They sold their homes and businesses for little money and resettled in other areas, mainly Europe, North Africa, and the Mediterranean.