With regards to food, I had no idea what to expect in Munich. Usually I do a bit of research, try to read up on the cities I visit beforehand. This time, however, I relaxed and let myself be guided by my personal tour guide: Mario. You see, Mario lived in Munich for a year around 2005–2006, and he knew his way around—geographically and culinarily. I mean, I had heard of Munich’s beer scene, though. And believe me, I was excited to drink some decent beer. No more Mahou or Cruzcampo for me! (Sorry for those of you who actually like that stuff, but ugh. Just no.)

Thus, I set out blind, not knowing what delights awaited me! Here’s what we ate and drank in Munich.

Weisswurst, Weißwurst in German, literally means “white sausages.” Unlike traditional sausages, they’re not made from just pork, but from veal and fresh pork back bacon and flavored with parsley, lemon, and various spices. They’re heated in salt water for a few minutes and served in a bowl with sweet mustard, as you can see in the photo. Traditionally, these sausages are not served after lunch, as they’re made fresh every morning, so you will be hard pressed to find a restaurant serving them for dinner, so your best bet would be to order them for lunch or a mid-morning snack. Be sure to remove the skin before tucking in! Don’t forget the brezen (pretzel) or the beer!

Pig knuckle … I know, I know—it doesn’t sound like the most appealing dish. But believe me, in Munich, you gotta try it. It’s a very typical dish in southern Germany, Austria, and Switzerland), and often served with hot sauerkraut and a dollop of a mashed potato sprinkled with parsley. Be sure to use the relatively dry potato to mop up some of this amazing juices from the meat. Mario was in heaven with this meal.

I feel like I had heard the name wiener schnitzel before visiting Munich, but I’d always thought of it as some sort of joke. I don’t even know why! Well, this dish is no joke—it’s delicious. Wiener schnitzel is a thin, breaded and deep-fried schnitzel (German for boneless meat, thinned with a meat tenderizer) made with veal. With a little lemon squeezed on top, it’s delicious and hearty. You won’t leave hungry. 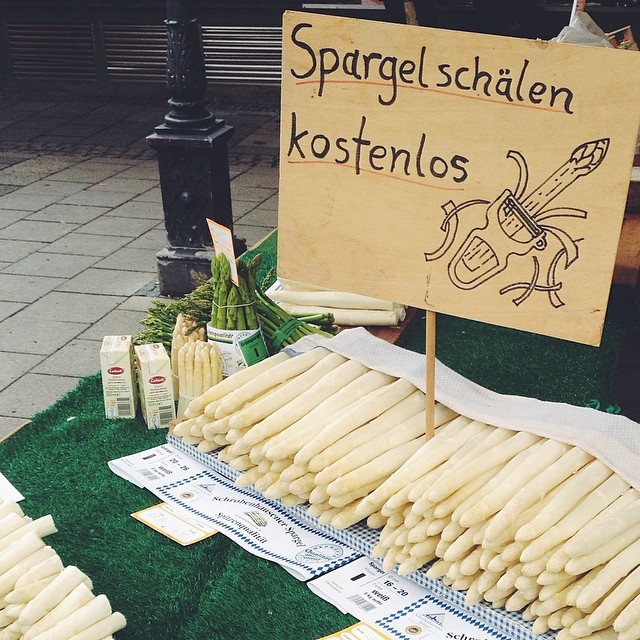 White asparagus is none too common in the U.S. We tend to go for the green variety, and if it’s wrapped in bacon … well, who would say no? However, Germans go nuts for spargel, asparagus, and we happened to arrive in Munich during asparagus season! Asparagus season marks the end of the cold, dark German winter and the beginning of spring. Thus, every vendor was selling two main things: asparagus and strawberries. The restaurants’ weekly menus all featured myriad asparagus courses: soups, salads, and savory dishes. I had an asparagus soup (spargelsuppe) that was divine. ‘Twas the season!

Omph, what a word! The word kaiserschmarrn comes from the word schmarrn (pancake) mashed together with kaiser (emperor), named after Kasier Franz Joseph I of Austria, who loved this dessert. Kaiserschmarrn is a dessert made of caramelized pancakes, cut up into pieces, and sprinkled with powdered sugar. Along with the pancake come other ingredients are added, such as nuts, fruits, or caramelized raisins. It is served hot, often in a skillet, with a fruit compote. (We had apple.)

While not exactly foreign to us, who can pass up a good apple strudel? Strudels are layered pastries with sweet (often fruit) fillings. Ours was served with a sauce that tested like melted vanilla ice cream. Don’t pass this one up just because you’ve had it before!

Okay, you don’t eat beer. I get that. But it used to be considered a source of nutrition (for monks in the Middle Ages anyway), and—most importantly—it’s delicious and refreshing and goes great with all that food we’d been eating! Also, it doesn’t taste like Mahou. So there’s an obvious plus. But what types of beers did we try? As much as we could!

There are so many different types of beers in Germany, from wheat beers to pale beers to dark beers. My favorite types are Weißbier, a wheat beer that’s light on the tongue and sweet to the taste, and Helles, a pale lager. If you’re used to Spanish beer drinking, you can even order Germany’s version of a clara, the Radler, a mixture of beer and lemon-lime soda. Mario much prefers their version of the clara to Spain’s, and I have to agree with him—it’s just better!

17 thoughts on “What to Eat in Munich”