I’ve been thinking a lot likely about the why of blog reading. This question, along with others, has prompted me to think about why I first starting reading blogs, probably sometime around 2005. It’s been nine years! I could hardly believe it. I started reading blogs to entertain myself mostly. I read blogs by semi-anonymous writers who were very open about their lives and experiences, but never “outed” themselves. I had never met them and had no interest in meeting them. They were anonymous, and I was happy for them to stay that way.

After a few years, I got into “healthy-living” blogs. You know, the kind where the blogger talks about what he/she ate that day, what sort of exercises he/she completed, and general health topics. This phase lasted a while, but I finally realized these sorts of blogs were uninspiring to me. I decided to quit reading them.

END_OF_DOCUMENT_TOKEN_TO_BE_REPLACED

I’ve had a short break during which I went private, brought on my insecurity about the future of this blog. Funnily enough, life in Spain is just life. (I know: I’ve said this before, a million times.) I don’t always have that much to say. The only thing I can say is that I will talk about this life without sugarcoating it, because I’m not Mrs. Bright and Sunny. There are so many things that are good about my life in Spain. For instance:

But then there’s the tough parts too: missing family, being sick far away from home with a system you don’t understand, the constant lluvia that has been the theme of this past week (which sucks even more when you have to walk two miles to work in it!), the lack of convenient transportation at times, and I could go on. But, although it’s my tendency, I’m focusing on the good.

There is always bad with the good. There just is. Yet  I believe I can be the kind of person (and blogger!) who sees both and chooses to focus on the latter.

If you were honest about life as an expat and/or traveler, what would you tell your readers?

I’ve never been a great photographer. It’s not that I don’t have the skills; I’ve just never dedicated much time to learning about the in-depth parts of shooting with a DSLR. In high school, I took a photography course (which threatened to derail my GPA, no joke), but we learned on old-school-style cameras. I used a Pentax K1000. It was actually a lot of fun, because we got to develop the photos ourselves, use filters, and generally mess around in a dark room, which—when you’re 17—is actually a lot of fun.

Well, I think I posted on Facebook a while back that it’d be nice to have a DSLR for Europe, because if you can’t find a good use for a nice camera in Europe, where can you? (Right?) Well, my parents have given Mario and me a Canon Rebel T3i.

Having experience with my mother’s older version of the Canon Rebel helps, but I’m still ready to go more in depth, to learn more about depth of field and lighting and RAW vs. JPEG.

So, since it worked so well last time, readers, please give me any advice that you may have. I know many of you own DSLRs, and I’ve seen your pictures. Do you have any suggestions? For example: tutorials, websites, books, ideas for practice, etc. I’d like to get in a lot of practice and knowledge before our trip to Italy. Thanks!

I get envious sometimes. Don’t we all? I think of Lena* and her beautiful family, Sara* and her running skills, Jessica* and the book she wrote, Ellen* and her blog … you get the picture. But since I’m a blogger, I used to get jealous of others’ blogs and their respective audiences, thinking they were better than me or more popular than me or more likable than me. I know blogging in the Internet and therefore not the “real world,” but it’s only natural to want to be liked, even if we’re only talking about the Internet, right?

*I made up all these names. Shhhhh. 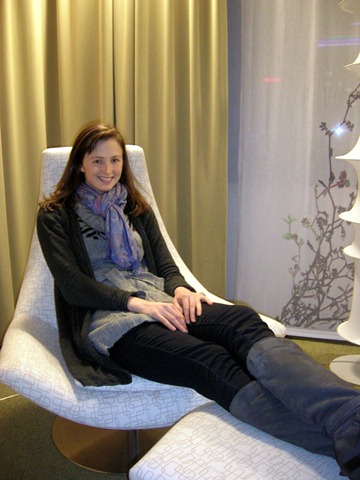 I started this blog as a way of keeping up with my family. At first, I updated very infrequently; my blog didn’t have a voice—it was more like a mass email anyway. But as I start finding more and more expat blogs, more Spain blogs, more blogs in general, I began to think about my audience and what they might like to read. I tried to develop a voice. I was in a perfect place to write humorous things about Spain—very cynical, actually, because I was having an immensely difficult time in Spain that year, 2010–2011, even if I only came off as angry. (See: How to Dress like a Spaniard, 15 Rules to Thrive in Spain, Not as Exciting as You Might Think.)

Nowadays, I feel sort of popular at times. I get sweet emails from readers, which I love. I get to interact with a lot of fun people on Twitter. But there are way more popular people, people with prolific readerships, people who seem to get a million comments a day. I think sometimes, How can I be like that? And then I realize …

I’m never going to be like that. I do self-promote, but I’m not a self-promoter. I do try to get more readers, but I don’t think too much about things like SEO, or advertisements, or how to strategically comment on popular blogs so as to garner more readers. I doubt I’ll become an editor at a travel magazine or website; I just can’t see it. I’m not saying there’s anything wrong with such things, not at all. Rather, it’s just not me. I’m okay with that. I’m Kaley from Y Mucho Más, and I really believe there are plenty of readers who appreciate that. I don’t need to change. Neither do you, if you don’t want to.

Do you ever experience blog envy? How would you like your blog to change (or not change) in the future?