…What happens? Good question! It’s been over a year now that we’ve been back in the U.S. It feels like a long time ago—and yet not so long after—that we packed our bags, said farewell to Madrid, and hopped on that Iberia flight. In fact, we were back last October to celebrate my brother-in-law’s wedding, held at a lovely vineyard outside of Toro. (If you know Spanish wine, you’ll know Toro.) 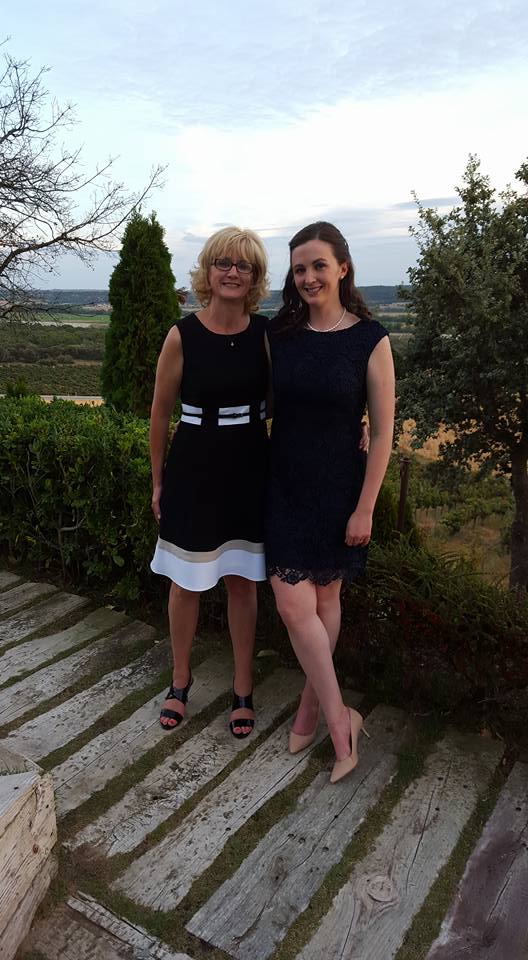 It was a whirlwind visit, leaving on a Tuesday and coming home on Monday (or something like that, my memory’s a bit of a blur), but it was wonderful to have our families reunited again. And, of course, there was a bit of wine, a bit of cheese, and lots of wine to wash it all down. 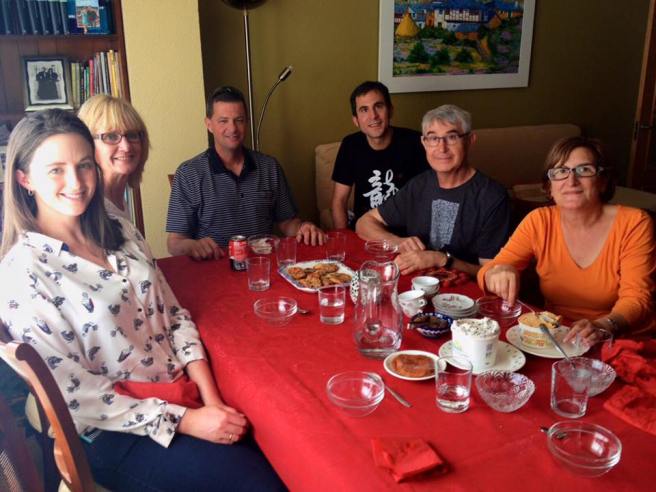 As for life in the U.S.? Mario’s certainly loving his new job as a paralegal; it’s all the lawer-y stuff without the stress of, you know, being an actual lawyer. He gets fun perks like open-bar office Christmas parties, tickets to the Indianapolis Colts preseason games (a suite!), and dinners with clients from time to time in one of Indy’s hip downtown neighborhoods.

Me? I’m back at school, earning my teaching license so I can continue to work with the little ones. Teaching was not always where I thought I would end up, but turns out that 1) I love it, and 2) I’m pretty good at it.

I’m going to try to update you on more things about our lives, because I just miss sharing from time to time, and who knows, maybe someone out there is still reading.

For more frequent updates, check out my Instagram or Twitter, and please email me if you have any visa questions, because I’VE BEEN THERE. I can help. In the meantime, here are some more photos from the past, I dunno, year. 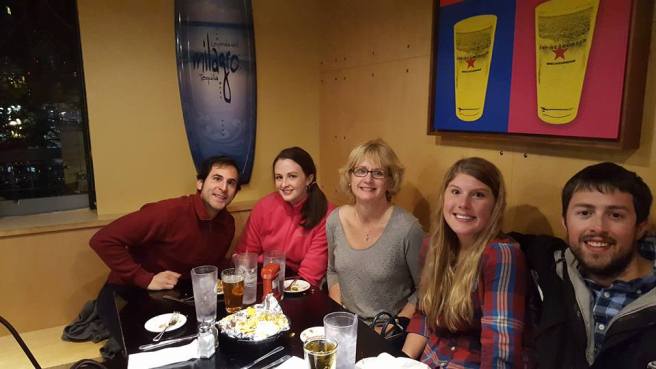 My birthday in Colorado

Trying to hang with college kids at IU 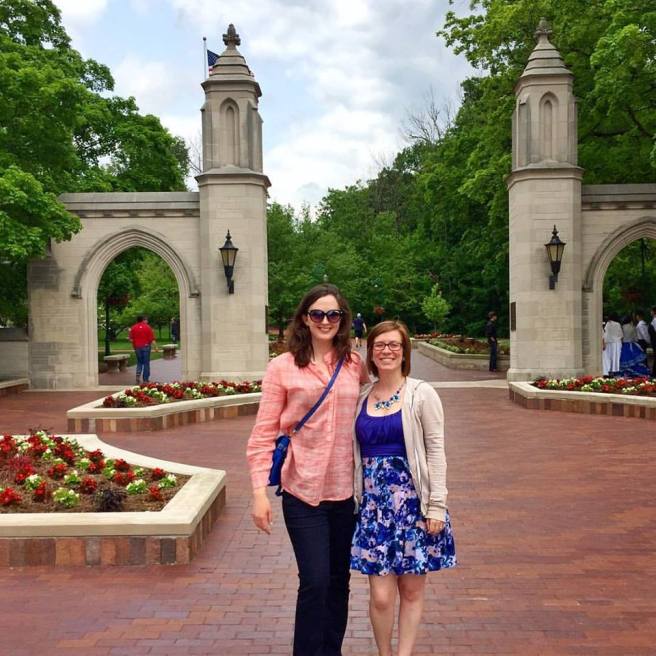 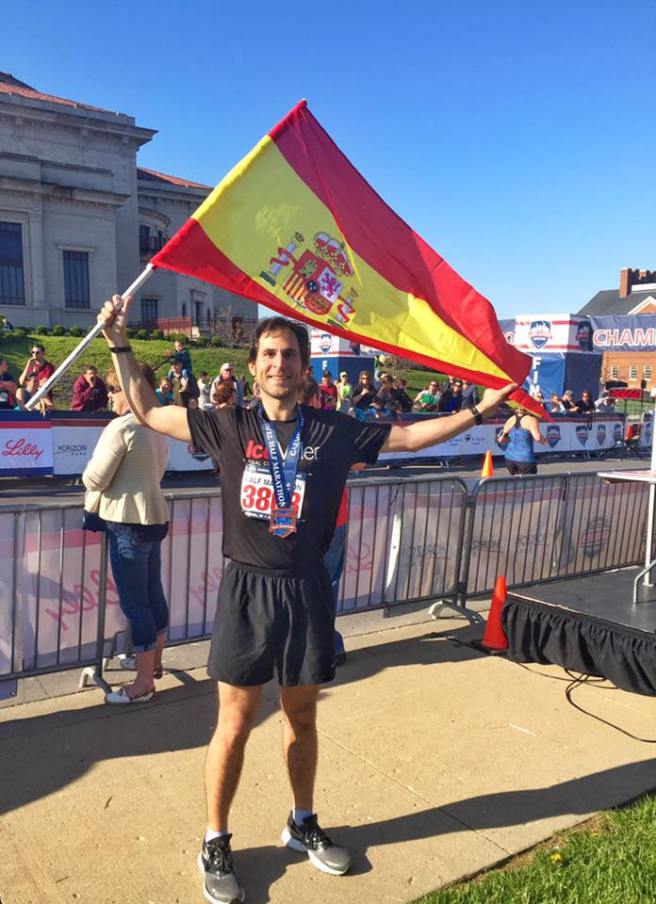 END_OF_DOCUMENT_TOKEN_TO_BE_REPLACED

Thanksgivings past involved much less stress and much more Cool Whip. The Wednesday before was the baking day. Up to our elbows in flour, butter, and sugar, we’d bake into the night, pie after pie emerging from our poor, overworked oven, the smell of pumpkin, cinnamon, and nutmeg filling our house. My mother always made too many pies, more than even our large extended family could eat in one day. Her staples were pumpkin and pecan. And oh, the crescent rolls, we mustn’t forget those buttery, crispy pastries, the ones that could only be improved by, yes, more butter.

This Thanksgving started unceremoniously with 95% alcohol, a match, and a dead female turkey. 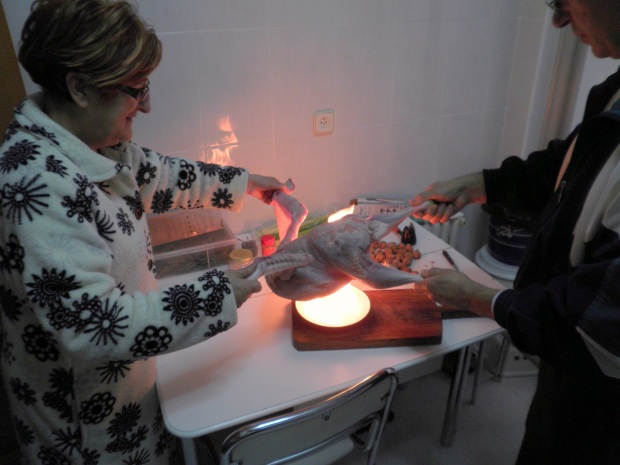 As was explained to me, this is to 1) clean the bird and 2) remove any feathers that might still be lurking. As one who is currently opposed to the ingestion of any and all feathers, I was all for it. Plus, it involved fire in a small Spanish kitchen!

The next four hours involved lots and lots of chopping, weighing, and conversions from English measurements to metric. How much is 6 tablespoons of butter? As Paula Deen would say, NOT ENOUGH. Add more delicious butter, lick it off the knife or your fingers, and again add some more. Butter should never feel superfluous. Not in my kitchen. Not in yours. I only had one small breakdown when Mario’s mother questioned me rapidfire in Spanish until I no longer knew how to say my own name. (I exaggerate.) I was trying to say “Bring it to a boil, lower the heat, and let it simmer.” I knew boil and I knew heat, but I couldn’t say “Bring it to a boil.” Now I know and I will surely never forget it. Ingrained is the word I’m looking for here.

Finally, it was time to eat. Mario’s brother Victor had spent some time designing a menu, which was completely adorable. Unfortunately, he asked me to revise it in the midst of the midmorning madness and I must admit I skimmed it. Thus, we ended up with parsil instead of parsley and pumpkin cake instead of pumpkin pie. Oh well, close enough.

My favorite part includes croutons in quotations because there is no word for it here, smashed potatoes, and the fact that both “piña troceada” and “surtido de dulces variados” mean “sliced pineapple.” Obviously, Victor knows better than that; it was just an error. We mustn’t forget the wines and various liquers either. Victor brought a cognac that Mario invited me to smell in order to clear out my sinus cavity. No thanks. 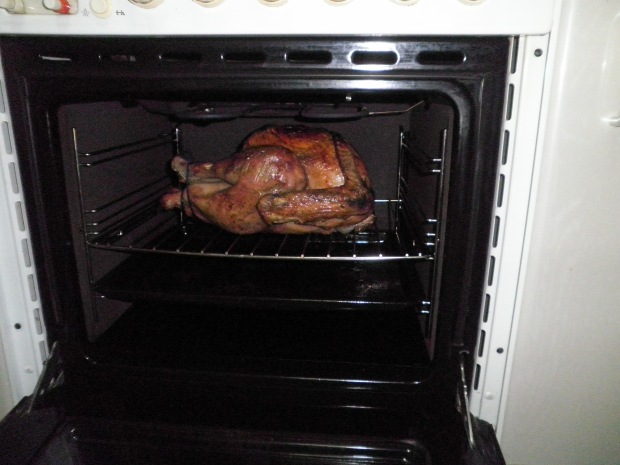 Turkey resting in the oven

Finished product. I am happy.

The dinner was a success. The two biggest winner were the stuffing and the maple glazed carrots. (I didn’t add the orange juice to the carrots.) Also, the “cranberry sauce” (actually made with raspberries, cranberries, blueberries, and blackberries) was a hit.

María José, Mario’s cousin and godmother, made a pumpkin pie. Actually, she used butternut squash, but, as I’ve informed my mother and Aunt Diane, Libby’s pumpkin is actually a variety of butternut squash (I know. Totes scandalous!), so it was pretty much the real deal. Too bad I’m not pumpkin pie’s biggest fan, but it was very good!

At the end of the day, I was quite happy with how it all turned out. María José kept asking for the stuffing recipe, and I think they’ll eat it at Christmas time, too. The turkey was good and not dry. Good conversation was had, even if their style of discussion seems like a heated argument to me.

After they had all left, Mario and I went out running, which turned out to be just what I needed. However, when Mario’s mother found out, she reprimanded me, telling me I should’ve just taken a nap, there was no need to go out running, you crazy girl. Oh well, you win some, you lose some, right?!

On Sunday, I went with Mario’s family to a little village called Puebla de Sanabria. Puebla is located in the northeastern part of Zamora (the province where Mario is from – they’re from the city itself). It’s beautiful, but most of all the lovely Lago de Sanabria, meaning Sanabria Lake. 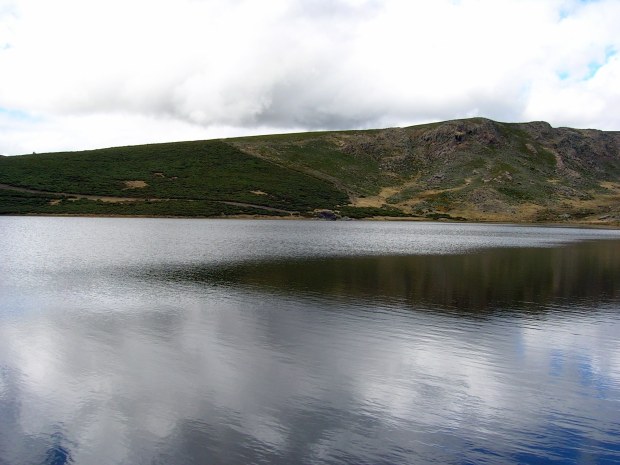 It’s quite different from the rest of Zamora, which tends to be quite dry and brown. There’s not much rain. The lake is the largest glacial lake in the Iberian Peninsula, which includes Spain and Portugal.

I love traveling with Mario’s dad because he gets excited about everything and is the quintessential teacher/professor type. He teaches geography at a local high school, and it shows. Unfortunately, his voice was gone from a rather vicious cold, and he was unable to speak. Instead, he’d gesture wildly, hoping someone would interpret for him. Mario was quite good at this, especially after it became clear that the main thing he was getting pumped up about were there the chestnut trees. It was though he’d never seen one, even after he’d pointed out the fifth successive tree. 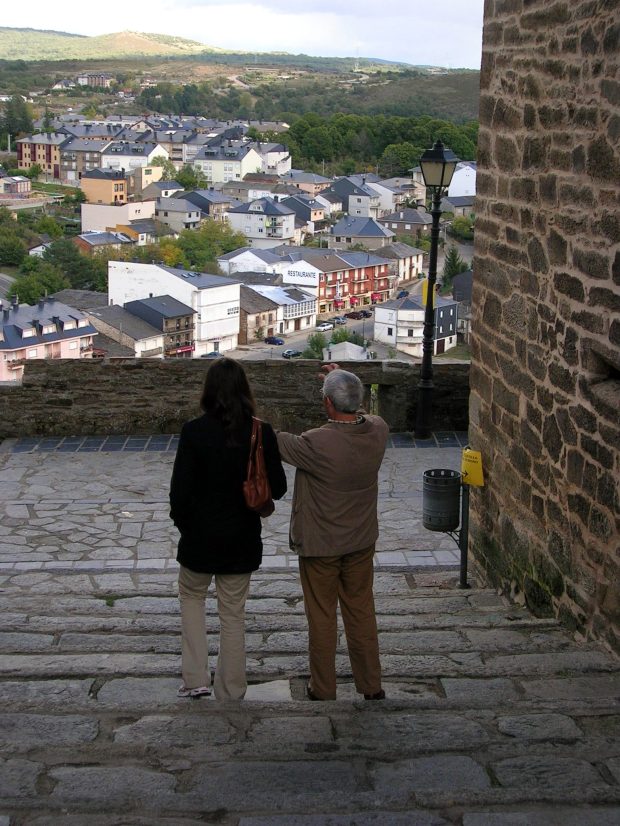 Here he is talking to me about some fact or another.

There wasn’t that much walking involved, although I suppose my family is a different sort from most Spanish families. A 2 kilometer long walk (approximately 1.25 miles) left his cousin saying, “We are soooo sick of walking.” It was cold, but I ususally can handle 1-mile long walks. After this, we visited another small site and promptly went to the village to eat lunch.

They say Americans are fat and Europeans are skinny, but don’t let that make you believe they don’t eat. Oh, they eat. Lunch is a long, drawn-out affair, starting with appetizers and progressing on to wine, salads, potatoes, and large steaks that took up a whole plate. Later, there’s dessert (maybe cheesecake or rice pudding) and shots of liquers, wherein Mario and I struggled to assert the fact that, yes indeed, alcohol depresses your nervous system, even if you do feel more awake after a glass of wine or two. 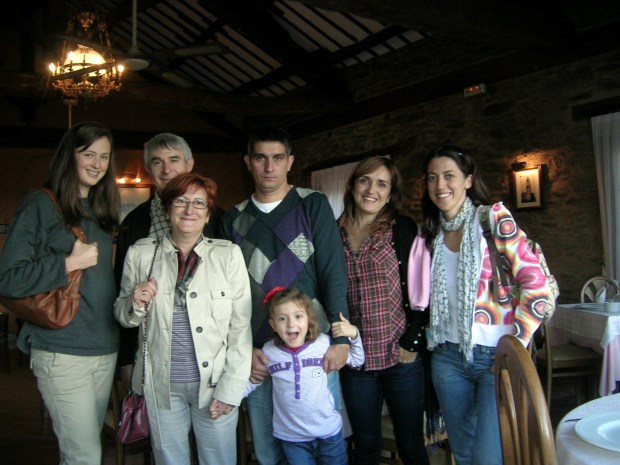 Me with Mario’s family and his crazy little cousin María.

I got to experience the phenomenon that will henceforth be known as Hurricane María. María is actually the daughter of Mario’s cousin Floro and his wife Marta. She is five years old and full of energy. Last time we met, she latched onto me with an intensity that can only be described as fierce. She couldn’t remember my name for the life of her, so I ended up being known as simply Marlin. Yes, like the father from Finding Nemo and, no, I don’t think we resemble one another, but you be the judge.

She talks a mile minute and, after this trip, I know why. It’s called…sugar. As we sat in the café, savoring our cafés con leche, María opened one sugar packet after another, pouring them into her mouth, on napkins, on the table, etc. Later, she stuck her hand in the spilled sugar and slowly drew her tongue across her palm. Her description of her typical breakfast? “Toast with sugar and three little spoonfuls of honey.” Sugar high much? Now, I doubt that statement’s veracity, as her mother claims she barely eats breakfast, but still…in her world, I think that would indeed be a rather delicious start to the day. 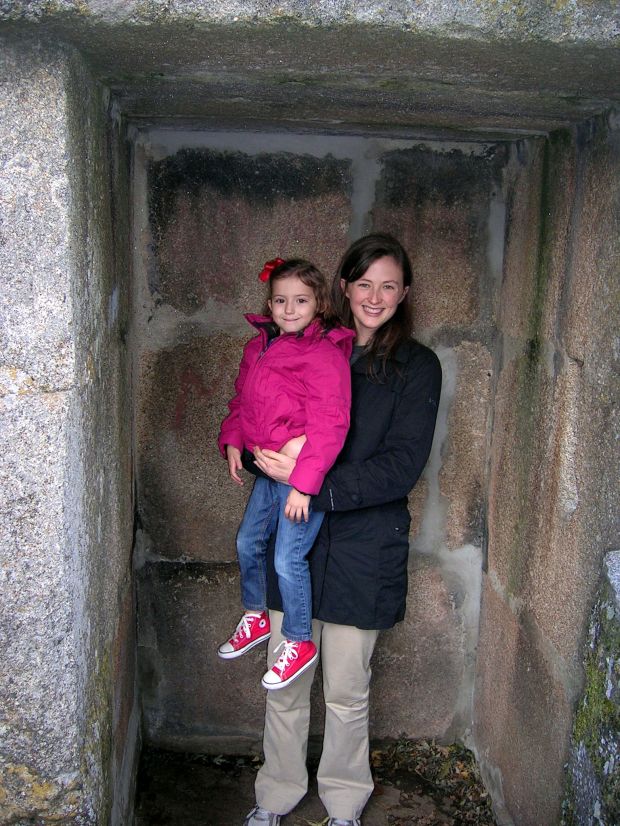 María, if you feed me toast, sugar, and honey we really can be best friends. And you can call me Marlin all you like.

All in all, a great day with good food, family, and friends. Couldn’t ask for more.